Looking at the spring season…of 2011? If just briefly. A US-centric, industry postmortem.

Someone once said that overall, the late-night anime business generally makes money. With Occult Academy due out in May, that marks the US release of all the Anime no Chikara anime. And that’s a good thing–all three shows have at least some redeeming value, demonstrating the power of anime to some degree. I’m going to assume they are making and going to make money for their licencors back home for a while yet.

This is the same power that enamored the neophytes with the new Lupin the Third anime, some of them having seen 3 or fewer hours of any other Lupin work to date. This is the same reason why Kyoto Animation’s Hyouka is not a call for tar and feathering, it is staving off 2ch otaku second-guessing those old-capitol animator lords on their high-riding horses. It is the same way that idols are going 2.5D.

Yamakan’s laughable exercise of Fractale is also due out in America. Will it sell? I know I will contribute my one out of 686 units. Along side with much of the hoard from 2010/2011, as struggling production major player Funimation slowly churn out these shows for its localized release. And in that sense I thought it is pretty representative–Nozomi got Soranowoto; Sentai nabbed Night Raid; NISA took Occult Academy. These three studios are relatively new-comers, with very different profiles. And while I can’t say anything about Sentai, there are no DBZ or FMA or One Cash Cow holding up the rest for those. There are just a variety of better selling shows and poorer selling shows. It is our future, in that while one could always say that the entertainment industry is propped up by that one hit, this does not have to be the case with this otaku-centric business model, and I think a lot of us benefit from this. 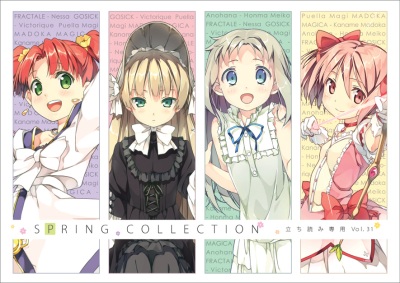 speaking of Fractale (of Funi), a random sampling of 2011 Spring pickups also says Anohana is NISA, Madoka is Aniplex, and Gosick was Bandai and now is in limbo. I think this is a good way to slice things up, and it really shows some weird sense of market competitiveness. It’s almost like the handing-off-of batons from one generation to another–clearly, some people license the wrong shows. And on the flip side I count my lucky stars that these companies generally licensed the right shows for them.

I feel that Funimation does a good job, generally speaking, with their releases, from the marketing end. Especially with the traditional fanservice-heavy shows. I thought their push for Strike Witches was spirited; comparatively the push for AsoIku not as much, but still, it happens. But they need to quit sitting on these simulcasts and get a move on with their releases.

Ultimately, it is new and exciting new licenses that energizes the fanbase and bring in revenue.

On the bright side, right now there’s real market diversity in terms of who is selling what, and we have FUNi to thank. They’re really serving it up to that 25-75 anime fan segment and leaving most of the rest alone. Unfortunately this is also reason to concern in that not everything is available in every single way. It remains the distant Avalon, a place promised in our filesharing days.

PS. Speaking of the 25-percentile, did you see those Ghibli Blu-ray Disc releases lined up for May? US domestic? I did and I’m like ＼(・ω・)／Let’sにゃー！